As the world looks like today – and maybe has done always – the human landscapes are in a constant state of change. The movement of people and the changes in the ‘landscapes’ is a fact that has to be considered in social, educational and cultural areas and services provided in society. Over the past 15 years the number of people, from all over the world living in Iceland, has increased a lot. Today about 12,5 % of the citizens in Reykjavik are immigrants. The largest groups are from Poland, Lithuania and the Philippines. When the landscapes change, we have to renew our maps. Since 2008 Reykjavik City Library has been running several intercultural programs and, within these projects, tried to put an effort into creating ties between people, cultures and languages represented in the capital of Iceland. All the projects are built on collaboration with diverse partners in society. In this article the reader will get an insight in some of them.

The Reykjavik City Library began its intercultural activities as pilot projects by hiring the author of this article as project manager. The projects are now all an integrated part of inter – and multiculturalism in Reykjavik, in the cultural, social and educational field, and have also been introduced, and in some cases transferred, to other countries such as Belgium, the Czech Republic, Spain, Canada, Greece and Denmark. The main idea behind the work is that individuals or groups should be seen in a wide context, rather than as an “icon” for one nationality or another and that the projects should appeal to “local people” as well as “global people”. 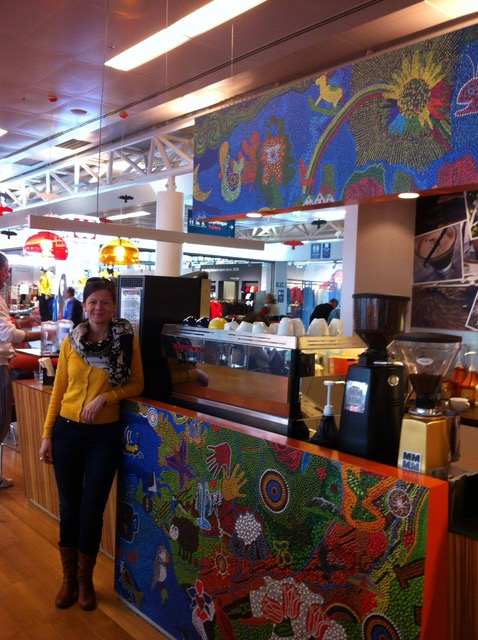 Desiring to contribute to a vibrant multicultural society and the development of intercultural competence, the target group is both Icelanders and world citizens living in Iceland. The goal is to promote awareness of the positive values of cultural and linguistic diversity – values that can contribute to dialogue and coexistence in society.

The library puts an emphasis on cooperating with schools, educational, cultural as well as social institutions, NGOs and individuals from all over the world living in Reykjavik. Among our partners are; The University of Iceland, The Department of Education and Leisure of Reykjavik, The Vigdís Finnbogadóttir Institute of Foreign Languages, The Red Cross, The Human Rights Office of Reykjavik, language schools and the two NGOs “Mother Tongue Association” and “W.O.M.E.N in Iceland”.

At Reykjavik City Library we use the IFLA/UNESCO Multicultural Library Manifesto as a guideline in the multicultural projects.

The objective of our work is to:

• Introduce Icelandic society to immigrants – and the opposite – through cultural and social encounters.

• Enhance awareness of linguistic diversity and intercultural competence among citizens.

• Encourage an open dialogue in society.

• Making connections between citizens through culture and the arts.

• Create an informative and dynamic forum of communication for diverse groups in society.

• Break down isolation and encourage compassion towards others.

• Make a visit to the library an integral part of the daily lives of immigrants.

The Women’s Story Circle and the new map of Iceland

How do we ensure to make space for everybody on the map and make a framework where the story of individuals gets to bloom?

One of the concrete projects created as a tool to fulfil the goals above is ‘The Women‘s Story Circle’, a forum where women from everywhere exchange stories, experiences and cultural backgrounds and take part in creative workshops as well as cultural visits and excursions. It‘s open to all women. Within the project three artworks have been created. They are now icons of multiculturalism and intercultural dialogue in Iceland. A creative writing workshop, a clown course and a drama course resulting in a multilingual performance have also been among the projects. The language of communication is mainly Icelandic, but women participating also communicate in all kind of languages. 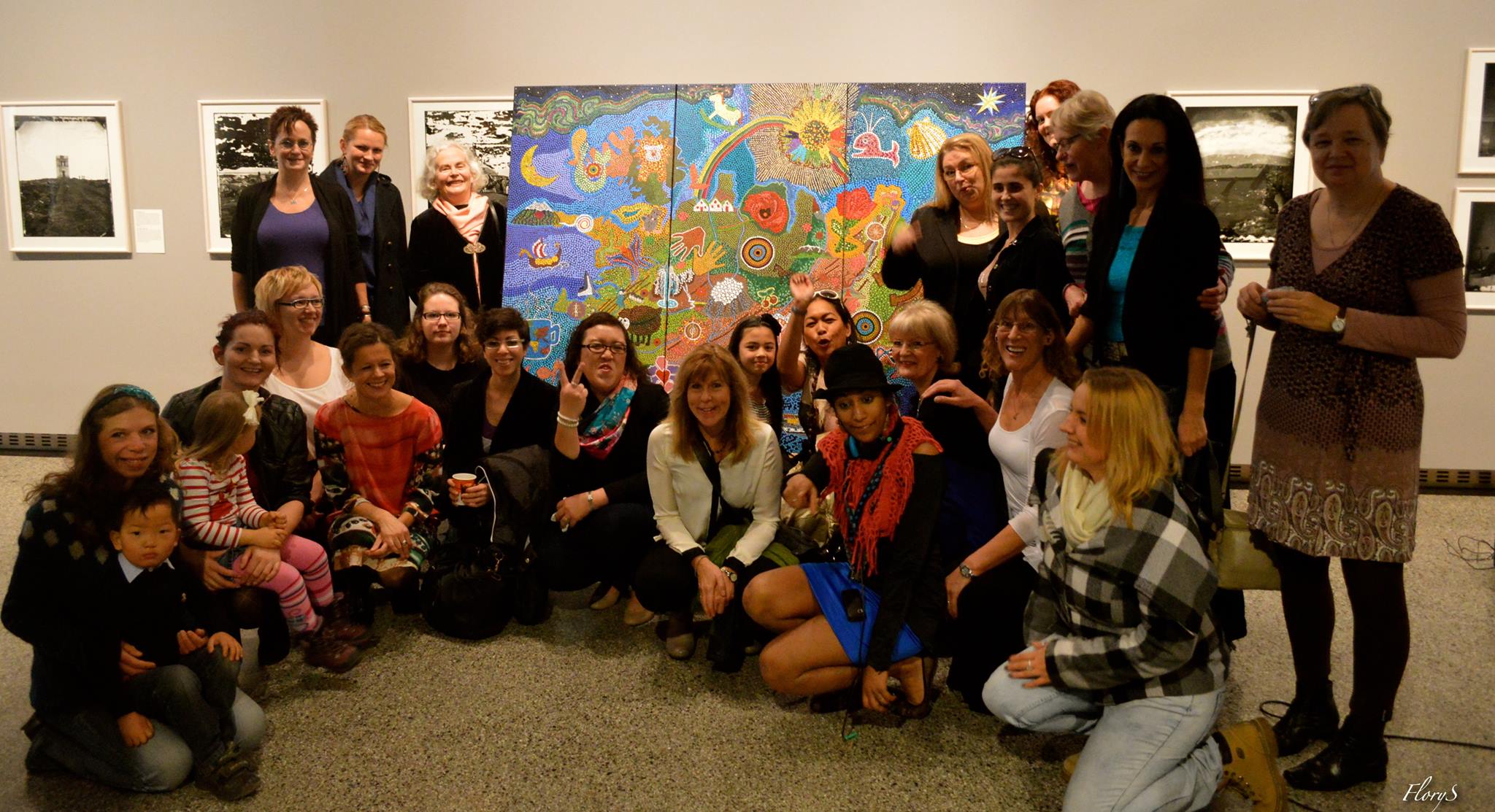 ‘The Women‘s Story Circle’ was founded in November 2008 and since then several hundred women, both Icelandic and non-Icelandic, have been participating in the programme – and new ones keep coming. The intention is to connect women with one another and to create a platform for networks and friendships. The project is a cooperation between the library and W.O.M.E.N in Iceland, an NGO whose goal is to unite, express and address the interests and issues of women of foreign origin living in Iceland.

Two of the three art works the group has created were made by using the Aboriginal method of painting with dots. Both paintings are maps, one of Reykjavik and the other of Iceland. What makes these paintings unique is the fact that the women have personalized the maps with symbols that are of significance to their lives, be that a connection to their own personal stories, their country of origin, Iceland or another place in the world important to them.

The map of Reykjavik was made in 2011 and is located in the Reykjavik City Hall where it has received quite a lot of attention from people passing by. Also it caught the attention of Kaffitár, one of the biggest coffee companies in Iceland, who approached us in the wake and asked whether The Women‘s Story Circle would be interested in making a painting, in the same spirit as this one, to be used as the new branding and logo for the company.

This lead to a very fruitful cooperation resulting in shedding light on how diverse backgrounds are now a vibrant part of Iceland’s cultural landscapes. ‘A new map of Iceland’ is a painting created by 35 women from all over the world. The art work was unveiled at The National Museum by Vigdís Finnbogadóttir, former president of Iceland, in the spring 2014 and has since then not only been visible on coffee – and chocolate packages, in super markets and as part of the interiors of the cafés, but also cars are driving around covered in the art work. In addition, the symbols are exhibited on the walls of the cafés with a photo of the women behind it and a short description, in Icelandic and their mother tongue, of their contribution to this colourful and lively version of Iceland. Everybody seems to adore what visually came out of this warm and creative process – but also the story behind its existence. We embrace that the idea also has reached foreign latitudes as “A new map of Greece” is now being painted by students from the Aristotle University of Thessaloniki in the same spirit as the Icelandic map.

The author assists teachers and students in organising intercultural encounters in primary schools, elementary schools and colleges. The project has been developed by her as part of teaching in Denmark and Iceland the last 15 years and is a practical tool to embrace diversity and enhance intercultural competence in the educational system. Schools can apply for becoming an „Intercultural encounter school“ and thereby implement the project so that it becomes more suistainable. Nine schools have got the title and more are on their way. The idea is to promote mutual respect and understanding between people in a concrete way and through different means of expression. Students, parents and staff members get an opportunity to introduce their personal culture(s), language(s) and interests in a lively way within an encouraging environment. Everyone involved should be received with acknowledgement. The project is part of the multicultural policy of the Departemnt of Education of Reykjavik, about 30 schools have taken part in it so far an 9 of these are now „Intercultural encounters schools“. The project has had it‘s own home page with guidelines for teachers since 2014: www.menningarmot.is. Some comments from teachers and headmasters are to be found here in English: www.borgarbokasafn.is/node/1043

The projects is a platform for those who want to enhance their language skills (Icelandic or other languages), a place to chat and communicate in various languages as well as a gateway into different cultures. One of the goals is to activate the languages that have found their way to Iceland, enriching life and culture, while at the same time to give immigrants the option to express themselves in Icelandic by introducing their mother tongue to other citizens. The linguistic events are held in different places around the city and aim to let everyone interested contribute to the linguistic landscape of Reykjavik. The “unveiling” of the world languages spoken in Iceland by immigrants seems to be a successful way of promoting a positive awareness of linguistic diversity. Especially the „ speed date a language“ model which we have implemented at the University of Iceland has built bridges between multilingual students and the Icelandic students studying languages. The wide range of partners in this project, such as The Department of Foreign Languages and Icelandic as a second language at the University of Iceland, The Vigdís Finnbogadóttir Institute of foreign Languages and several NGOs, has influenced on the expanding. The „Café Lingua – living languages“ of the Reykjavik City Library is now being implemented in Czech Republic as a result of European grants.

Information about all the multicultural projects:

Various multicultural/multilingual events through the year:

• “Reykjavik Safari”, a guided walk in multiple languages where immigrants introduce other immigrants to cultural life of Reykjavik in their mother tongue.

•“Children teach children languages”, programmes where children introduce their mother tongue to others in a fun way.

•A celebration of the International Mother Language Day in February and The European Day of Languages in September.

In 2017 a handbook with digital guidelines to how the projects have been developed will be published in Icelandic and English. Everybody is welcome to contact us for further information.

This site uses Akismet to reduce spam. Learn how your comment data is processed.